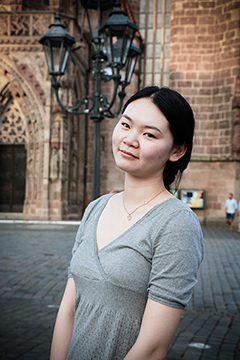 Born in 1990 in Beijing, China, LI Qi is currently a master's degree student majoring in composition at the Jacobs School of Music.  Her teachers include Sven-David Sandström, Don Freund, Claude Baker, Aaron Travers, and P.Q. Phan.  Recent commissions include An Autumn Dusk in the Mountains for the Composers Conference at Wellesley College, Tristis est anima mea for SSAB Choir commissioned by Miguel Diniz (Portugal), and an arrangement of Yummy Music for IU Kids Compose commissioned by the IU Concert Band.  She was the recipient of the Dean's Scholarship and Artistic Excellence Fellowship from the Jacobs School of Music, the Irving and Lena Lo "ILLO" Scholarship, and awards from Hutton Honors College.  Her works have been performed in the Midwest Symposium in Cincinnati, the HighSCORE Festival in Italy, the Composers Conference at Wellesley College, the "East Meets West: A Concert of New Chinese Music" at the IU Art Museum, among other venues.  In addition to the Bachelor's degree in Music Composition she earned, Qi also received scholarships and obtained a Bachelor's degree in Computer Science and Technology in 2012 and from the Communication University of China.