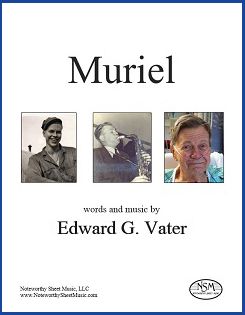 Contemporary Ballad for Voice with Piano or Guitar Accompaniment

Edward G. Vater (1923-2018), my dad, was quite a remarkable man.  A lifelong-resident of New Britain, CT, he was an educator by profession, and served many years as a school teacher and later as a college administrator.  But he had numerous, diverse interests and took on many challenges over the years, including raising three children with his loving wife Anne (Mickey) Siton Vater, building a house, studying the Russian language, teaching English to Russian immigrants, working as a tool and die maker summers to support his young family, and serving his community in various roles such as Democratic Town Committee member, Justice of the Peace, and Chairman of the Public Works Department, to name a few.  Displaying a life-long love of music, he was heavily involved in school music programs as a child, and loved to sing and play saxophone and clarinet.  He played alto saxophone in dance bands during his stint in the U.S. Army Aircorps in England during WWII and stateside after returning home, often in groups with his two brothers, Al and Bob.  He sang and played his horn most days, still infusing his music with tenderness and passion, until a couple weeks before his death in April, 2018.

At age 93 and dealing with metastatic melanoma but still independent, Ed moved into an apartment in Arbor Rose, an independent-assisted living facility.  Upon hearing him sing his song Muriel, Denise Lebrocquy, one of the administrators there, arranged to take Ed to a professional music studio* to make a recording of him singing the tune, for which he had written the music and lyrics.  This was a beautiful and uplifting experience for him, and one for which I too am very grateful.  The audio file may be heard by clicking the mp3 link below.  John Pratt, Jerry Gleason, and I entered the melody, chords, and lyrics for Muriel into a music notation software program for publication of the lead sheet on NSM, so we can share my dad’s moving love-song with our website visitors and pay tribute to a wonderful man and a life well-lived.

Ed Vater wished to give thanks and dedicate his song Muriel to the Jerome Home/Arbor Rose health complex at 975 Corbin Avenue, New Britain, CT, and to health care providers everywhere.

We're making Muriel (Copyright © 2016 by Edward G. Vater) available free of charge, with the understanding that the song writer will be publicly credited upon any performance or other use of his song, and with the suggestion that donations be made to the Melanoma Research Alliance in support of finding a cure.  Click to download a PDF of the NSM edition of the Muriel lead sheet or to listen to the Muriel audio recording.

A video of Ed Vater being interviewed and singing Muriel aired in the Hartford area on NBC on January 1, 2017; here's a link to the full news story, and another to just the music video.