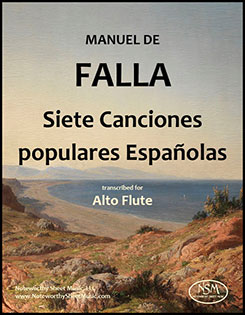 Transcribed for Alto Flute (and piano) by C. A. Vater

Manuel de Falla (1876-1946) is regarded as one of the greatest Spanish composers of the twentieth century. His Siete canciones populares españolas (“Seven Spanish Folksongs”) is a cycle of traditional songs from various regions of Spain set for voice and piano. Written in 1914, the work quickly became very popular: in 1925, six of the seven songs were arranged for violin and piano as the Suite populaire espagñole by the Polish violinist, composer and arranger Paul Kochánski, and subsequent versions were designed for solo piano, voice and guitar, piano and cello, and orchestra. We created the Noteworthy Sheet Music alto flute part by adapting ideas from both the Falla vocal line and the Kochánski violin line, modifying pitches, articulations, dynamics, etc. as needed to best suit the alto flute’s range and style.  Our alto flute part is intended to be accompanied by piano using the original Falla score for voice and piano, which is available as a free downloadable pdf at imslp.org; we provide only the transcribed alto flute part in the NSM edition.

The seven songs included in the original voice and piano publication, as well as in our alto flute part edition, are El Paño Moruno (“The Moorish Cloth”), Seguidilla murciana (an old dance form, omitted in the Kochánski violin and piano version), Asturiana (a lament from the northern part of Spain), Jota (a familiar dance form from the north east of Spain), Nana (an Andalusian lullaby), Canción (“Song”), and Polo (reminiscent of the zapateado, a Spanish dance rich in flamenco rhythms). This information and an in-depth analysis of the Siete canciones populares españolas, including historical and regional background, music analysis, and an English translation of the lyrics, can be found in the excellent article by composer and conductor Gianmaria Griglio, co-founder and Artistic Director of ARTax Music.