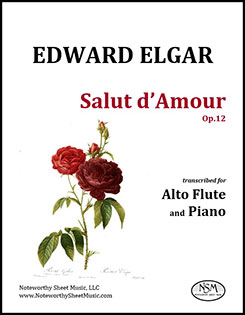 Transcribed for Alto Flute and Piano by C. A. Vater

The English composer Edward Elgar held many positions throughout his career, including those of organist at St. George’s Roman Catholic Church in Worcester, conductor of the Worcester Philharmonic, Professor of Music at the University of Birmingham, and conductor of the London Symphony Orchestra. He achieved considerable prominence as a result of his many successful orchestral, vocal, and chamber music compositions. Elgar composed this piece in 1888, as an engagement gift to his beloved future wife. Though first written for piano solo, arrangements were created shortly thereafter by the composer himself for violin and piano, and for orchestra. Originally titled “Liebesgruss” (Love’s Greeting), but later changed to  Salut d’Amour, the piece is now one of Elgar’s most widely recognized works, and its immense popularity has led to arrangements for a wide variety of other instruments. We provide here a transcription of  Salut d’Amour  for alto flute and piano, which has been adapted from the editions published by Schott for violin and piano, oboe and piano, or orchestra and which are now in the public domain.