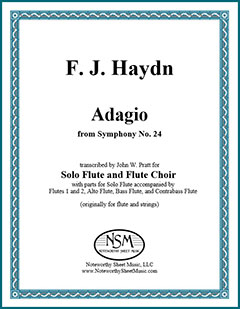 Adagio from Symphony No.24 by F. J. Haydn

Haydn wrote his Symphony No.24 in 1764. Its second movement is a beautiful Adagio for flute solo accompanied by strings. The string parts are simple, with no double stops or extreme high notes, so they can be played comfortably by corresponding members of the flute family, except for a few low notes.  This transcription for flute choir is therefore straightforward except that the alto flute sometimes plays violin notes that C-flutes cannot play or can use support playing, and similarly the bass flute plays some viola notes instead of or in addition to the alto flute playing them. Notes taken from the cello in its lowest octave have been raised an octave for bass flute, but there are fewer than one might expect. Perhaps one reason is that Haydn expected a (string) bass to be doubling the cello an octave lower, playing from the same part. If a contrabass flute is available, it can double the bass flute similarly, serving even more to enrich the sound. —adapted from JWP’s preface to the edition

Listen to a computer-generated audio sample.