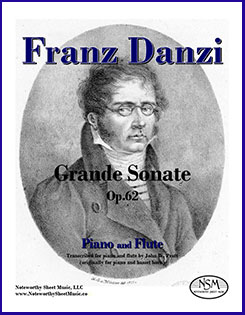 transcribed for Piano and Flute by John W. Pratt

excerpted from John Pratt’s foreword to the edition: 'Franz Danzi (1763-1826) was an active musician, cellist, and teacher in Mannheim, Munich, Stuttgart, and Karlsruhe.  A prolific composer, especially of music for the stage and chamber music from keyboard solos to sextets, he revered Mozart and mentored Weber.  His wind quintets are notable.  His Grande Sonate, Opus 62, for piano and basset horn, was published about 1823, along with an alternative cello part which sometimes differs from the basset horn part in other ways than octave transposition. // The sound of the basset horn varies widely, depending on its construction, who is playing, what is being played, and who is describing it.  George Bernard Shaw said, ''The devil himself could not make a basset horn sparkle.''  Burnet Tuthill, in Cobbett's Cyclopedic Survey of Chamber Music (1929), wrote of its "soft mellow timbre of rich beauty.”  E.T.A. Hoffmann likened its sound to the scent of red carnations (see Georgina Dobré, The Basset Horn, who says, pace Shaw, “Sparkle it certainly can!”).  That tent is broad enough to cover the characteristics of both the flute and the clarinet comfortably, and Danzi’s Grande Sonate alternates sparkle and mellow rich beauty in large measure.'  Since we at NSM have grown quite fond of this piece, we decided to transcribe it for both flute and clarinet, so we and our friends could enjoy playing it.  We offer here the flute edition, with a version for clarinet to follow in the coming weeks.